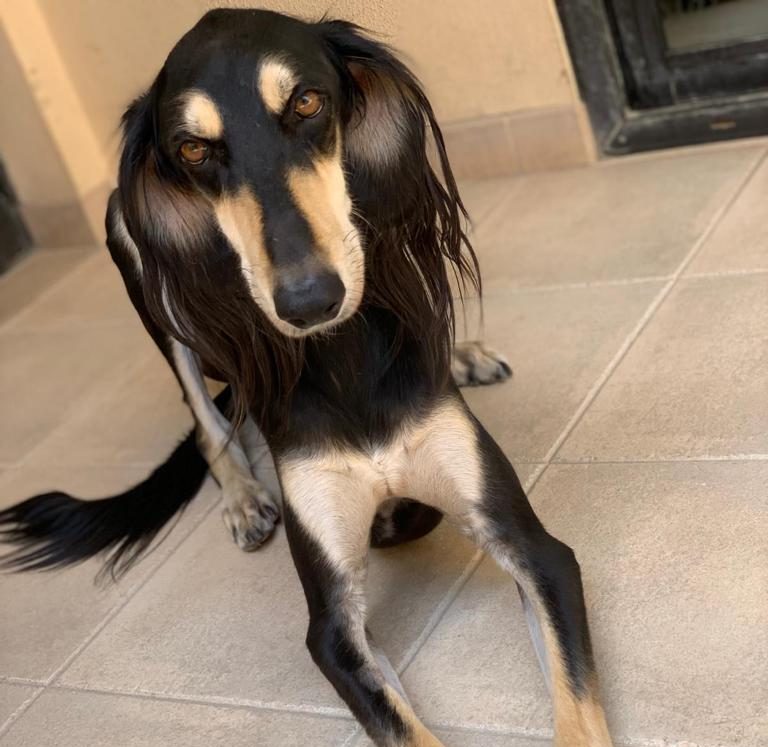 “The Saluki is thought to be the world’s first domesticated dog, as old as the earliest known civilization. They have been called “living antiquities.”

Salukis are an ancient breed originating in the Fertile Crescent in the areas of Mesopotamia and Sumeria who have shared the lives of many peoples throughout the world including the Pharaohs of ancient Egypt, the Emperor of China, Persian nobles, English nobility and the humble homes of people worldwide who recognize them for their intelligence, speed and beauty. Salukis are sometimes known as the Royal Hound or the windhound because of their great speed and stamina. The Saluki appears on the Egyptian tombs of 2100 B.C. and more recent excavations of the still older Sumerian empire, estimated at 7000-6000 B.C. have produced carvings of obvious resemblance to the Saluki. Used to chase, catch and kill game such as rabbits and gazelle, they are members of the “Sighthound” group of dogs, those hounds who hunt with their eyes rather than their noses. Built for speed, the sighthound is capable of outrunning the game. Salukis are thought to be ancestors of today’s greyhound (they were once called Persian Greyhounds). When the Romans conquered Egypt they brought Salukis back to Rome and crossed them with other breeds to form the basis for modern greyhounds. Salukis were known throughout the Middle East and Asia, being the hunting dog of Egyptian Pharaohs, companion to the Emperor of China and Persian rulers. It has been said that whenever one sees references to “dog” in the Bible in a positive light, it refers to the Saluki.

So great was the esteem in which the Saluki was held that his body was often mummified along with the bodies of the Pharaohs themselves. Salukis did not appear in Western Europe until the mid-1800s, when Florence Amherst brought a pair to England, but they were not bred there until the turn of the century. The American Kennel Club recognized the breed in the U.S. in 1927. Today, Salukis are not a well known breed, but there are dedicated fanciers in many parts of the world keeping the breed alive and well, and as true to its original form and purpose as possible.

The Saluki ranges in height from 23″-28″, and weighs 35-65 lbs. They come in many colors–cream, gold, black and tan, red, grizzles of different shades (silver grizzle, deer grizzle, ivory grizzle), tricolor (black, tan and white), and parti–colors of different shades. There is also a choice of coat, either feathered with long, silky hair on the ears and tail; or the genetically dominant smooth variety. They have almond-shaped, far-seeing eyes; an elegant long muzzle; long neck, slender waist and lean physique, made for running. In disposition, the Saluki shows great attachment to his humans. He is affectionate without being demonstrative, a good watchdog but not usually aggressive.

The Saluki is an intelligent, intuitive, sensitive hound known for his aloofness with strangers and his ability to bond totally with his human companions. He can be shy. For those of us who have been captivated by them, there simply is no other dog. Salukis are very much free spirits and do not take well to harsh treatment. They deserve better and they know it. When Saluki and human are a good match, the relationship is near magic. They practically read your mind. They know your moods, they comfort you when you have problems, and celebrate with you when you are in a joyful state. They love to be close to their people, finding sublime happiness in snuggling with you in bed or on the sofa.

There can never be too much petting from the Saluki’s point of view, although their far off gaze may give the impression that they are quite bored with the whole thing. The moment you stop, however, you will quickly find a moist nose nudging you to continue. The Saluki can be a clown (wearing the brim of your new hat around his neck while the crown lies chewed to bits on the floor around him). The Saluki is not often thought of as a good protector, but he can be and he will protect his own.

The one thing that can be confidently said about Salukis is that they are always surprising, never boring. They challenge human intelligence and often exceed it. People who don’t truly live with their Salukis in a family situation, don’t know what they’re missing. The Saluki is like caviar, an acquired taste that is relished by connoisseurs. Each one is uniquely different. Salukis have been likened to potato chips–it’s hard to stop at just one.

–Excerpted from Saluki Secrets: A New Owner Guide to Living Successfully with a Saluki by Cherie Fehrman.

Project Galgo feel very honoured to be joining partnership with Emtinan, an extraordinary woman working round the clock, saving at the drop of the hat, in sometimes very precarious situations, salukis, sloughis and other hounds in dire and at times critical need of help. Emtinan is their lifeline. Currently, it is more difficult than ever due to travel restrictions to rehome these exceptional souls. There is only so much space Emtinan has. We are so happy to be helping her and the dogs she saves and in helping them, we enable Emtinan to help more. We are the only UK Partner for Rays of Hope and extremely proud.

In 2022, we welcomed our first four salukis – Basha, RAMZI, CELINE AND LUKE. Join us in this very special and crucial mission. Be a Ray of Hope.

Made with ❤ by FutureProof Digital